Heart of the Rockies

Bazil Leonard is an 85-year-old legendary mountain man. His way of life has been threatened by a recent heart condition which has left him semi-mobile. A recent meeting with an Edmonton Cardiologist revealed that his condition may be remedied with either medication or, possibly a pacemaker.  Summer has arrived and Bazil is chomping at the bit to get his horses shod in order to travel deep into the mountains. He waits patiently for a decision from his cardiologist regarding his treatment, so he can remedy his condition and can get on with life.

Heart of the Rockies is a 3-part ½-hour docu-series that details Bazil’s struggle to heal his heart so he can travel by horseback into the Alberta Rockies; rather than the alternative which would be a very sedentary retirement. He believes his cardiologist will give him a new lease on life, enabling him to explore hundreds of kilometers of mountainous wilderness on horseback.

During his expeditions Bazil will share the history, customs and culture of the Canadian Rocky Mountains. He will teach his grandchildren and other youth, how to live beyond mere survival, in comfort, on a land that offers so much.

Bazil will travel with his lifelong friend, 89-year-old Cree Elder Tom Wanyandie, who suffers from arthritis but is determined to keep riding the historic trails. The mountain men will impart a deeper understanding of how generations of yesteryear connected with the mountainous regions.

The documentary will reveal a rich exposé detailing a simpler way of life on the trail and on the trapline. The production will infuse hope into the viewer, sharing the spirit of how two seniors overcome their physical challenges, to carry on a way of life that they both love. The production will divulge an intriguing story, featuring a little-known history and distinctive culture of Alberta’s Rocky Mountains. 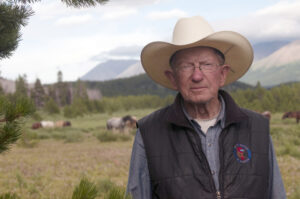 Heart of the Rockies is in production and will air in 2022. 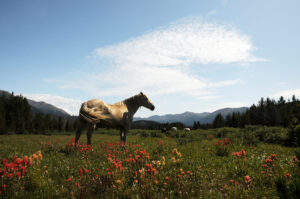